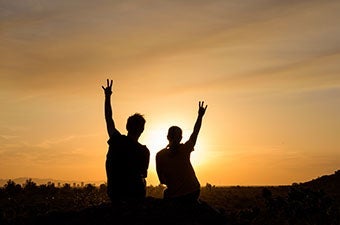 Recognizing the success of DACA and undocumented students

It’s important to recognize the success of DACA and undocumented students who’ve earned their degrees and gone on to affect change in their communities in positive ways. If you know a DACA or undocumented student who could be featured, please contact us.

Dalia is a Harvard Medical School graduate in her first-year of the Harvard Resident Oncology Program (HROP). Her educational journey began in Mesa where she graduated from Dobson High School in the top 1% of her class. Despite Dalia’s desire to use her studies to help communities in need, her longing to earn a college degree was threatened by her status as an undocumented immigrant. Nonetheless, she remained determined and in 2012, she graduated with a major in Biological Sciences (Genetics, Cell and Developmental Biology) with a 4.0 GPA from Arizona State University and as a scholar of Barrett, The Honors College. During her undergraduate years, Dalia conducted research at the Biodesign Institute in the Center for Infectious Diseases and Vaccinology and began exploring the various dimensions of human health through community involvement.

Her desire to become a doctor still prevalent, Dalia applied to Harvard and she was the first DACA recipient to be admitted to Harvard Medical School. In January 2018, she and three other Harvard Medical School DACA students penned an essay about the impact President Trump’s decision would have on them, the approximately 100 medical students then attending medical schools in the United States and thousands of other DACA recipients. Dismantling DACA Could Also Destroy These Harvard Med Students’ Dreams. She later discussed the essay in a very moving video for Boston’s NPR News Station: I Am a Future Doctor. And I Am Also An Undocumented American: Behind the Essay. As she said in her video, “What happens with this immigration issue will define who we are as a country.”

Oscar Vasquez
Oscar came to the United States at the age of 12. He was a member of the Carl Hayden High School Robotics Team who beat MIT at an underwater robotics competition in 2004. In 2005, Oscar enrolled at ASU, excelled academically, started a robotics team on campus, got married, and had his first child, all before graduating in mechanical engineering in 2009. Prior to the passage of Proposition 300, his education was funded by institutional scholarships. In 2007, that changed to the Sunburst Scholarship and then the American DREAM Fund. After graduation Oscar was not able to secure a job due to his immigration status so he did what the law said and self-deported to Mexico in hopes that he would return “home” to the U.S. quickly. Over a year later, through the intervention of US Senator Richard Durbin, Oscar was able to return to the US to get his permanent residency. Oscar was finally able to pursue his dream of joining the military as a sergeant in the US Army where he served two tours to Afghanistan. He now works as a business analyst in a software development team for Burlington Northern Santa Fe Railways in Ft. Worth, Texas.

Reyna Montoya
Reyna was born in Tijuana, Mexico and migrated to Arizona in 2003 fleeing violence. She is an undocumented/DACAmented community organizer, an educator, and a dancer. She is a 2016 Soros Justice Fellow, which enabled her to start Aliento. She also serves in the first Teach For America DACA Advisory Board. Reyna holds bachelor degrees in Political Science and Transborder Studies and a Dance minor from Arizona State University; she also holds an M.Ed in Secondary Education from Grand Canyon University. She has engaged in local, statewide and national platforms to advance justice for immigrant communities. In 2013, she was the lead organizer, who prevented an immigration bus of undocumented immigrants from deportation in Phoenix, AZ for the first time in the nation’s history. In the same year, with the help of the community, she stopped her father’s deportation. She has been recognized for her work via several national platforms such as 2017 #NBCLatino20 and Forbes Magazine 30 Under 30 social entrepreneurs. She hopes to share her talents and skills with the community to co-create healing spaces, political change, and leadership development of our immigrant youth. Photo Credit: Axel Dupeux for the Open Society Foundations.

Germán Cadenas was born in Venezuela and immigrated to the US when he was 15 years old due to growing violence and division there. He was undocumented for nearly 10 years, and his experiences as an immigrant and growing up in poverty sparked his interest in the intersection of psychology, social oppression, education, and liberation. He graduated from McClintock High School in Tempe, from Mesa Community College with two degrees, attended ASU thanks to the American Dream Fund Scholarship, and graduated with two bachelor's degrees (psychology and business). He was also a founding member of the Arizona Dream Act Coalition and was involved in starting the resistance against SB1070. Germán was the first publicly undocumented student to be admitted to a Ph.D. program in Arizona, and his story garnered media attention. While a graduate student, he was involved in mobilizing the ASU community to support undocumented students and was in the committee that created DREAMzone. He also created the Poder entrepreneurship program, served as president of the ASU graduate student body, and coordinated advocacy efforts for in-state tuition for undocumented/DACA students. Germán completed his Ph.D. in counseling psychology in 2017, he spent two years as a doctoral intern and postdoctoral fellow a the University of California Berkeley, was a lecturer at San Francisco State University, and is currently a tenure-track assistant professor in the College of Education at Lehigh University. His research focuses on the psychology of immigrants and underrepresented minorities. He hopes to continue training culturally competent mental health providers and educators to work with immigrant communities and to continue supporting advocacy for immigrant rights.

Daniel A. Rodriguez graduated from Arizona State University with degrees in Political Science and English Literature, and received his Juris Doctorate at the Sandra Day O'Connor College of Law. Daniel has worked with and founded various advocacy and education-based organizations, including the Arizona Dream Act Coalition (ADAC) and the Somos America / We Are America Coalition, Onward Hope and the Isac Amaya Foundation. Daniel's recognitions include being a recipient of the 2008 Most Outstanding Hispanic Undergraduate at ASU, the 2014 Most Outstanding Graduate Student at ASU, 2014 Dean's Award at ASU Law, the 40 Hispanic Leaders Under 40 Award in 2010, and the recipient of the George I. Sánchez Memorial Award for 2014 by the National Education Association. In 2014, Daniel became the first undocumented/Dreamer Attorney in the State of Arizona. Daniel is owner of the Law Offices of Daniel A. Rodriguez, a firm focused on family law and immigration law.